St. David’s Round Rock Medical Center was one of the first full-service community hospitals in Round Rock, TX, which is one of the nation’s fastest growing cities. Yet, competition came with the area’s dramatic population increases, with rivals all touting themselves as the “best” of one medical specialty or another. Celeste Lesmeister, marketing director at St. David’s Round Rock Medical Center, knew consumers had unmet needs, so she partnered with Austin, TX-based Elizabeth Christian & Associates Public Relations and Special Audience Marketing to conduct research and create a campaign to address those needs, while also promoting the medical center and its emergency services.

The hospital wanted to cut through the clutter of competitive claims in a crowded healthcare market and give consumers the information they might need in an emergency situation.

Based on custom focus group studies, Lesmeister and her team developed a multifaceted campaign that included a hospital direct mail piece, a smartphone application and a print campaign targeting consumer and county emergency medical services.

“We had just completed a direct mail campaign for our urgent care centers locally. We had just opened one in eastern Round Rock. Within two days of our hospital direct mail hitting, we saw that the direct mail resulted in an immediate spike,” says Lesmeister. “So, when we started devising this campaign, direct mail seemed like the most natural medium. We could cross-market the smartphone technology and we could put something in a consumer’s hands to give them the resource they needed. They could learn about us, but they could also educate themselves on how to be proactive in an emergency.”

The direct mail piece included instructions on how to download the smartphone app iTriage, an acute care decision tool to guide consumers through symptoms to possible causes. It also incorporated GPS technology to help consumers locate emergency and urgent care services, as well as pharmacies and other medical services.

Lesmeister says the campaign was so successful that the St. David’s system is considering launching it at all the organization’s facilities throughout central Texas.

St. David’s has filled more than 200 requests for the emergency ID kit through Internet requests. As a result of the campaign, there were 4,000 hits on the hospital’s website. Almost 3,000 considered as “new” or unique visitors. Over the past three months, 150 consumers have mentioned the piece upon their arrival at St. David’s emergency room. Physicians have also requested the packets to hand out in their offices. The medical center has provided 1,000 additional ID kits across the market, specifically to physician offices.

Many Hospitals mail to New Movers in their communities on an on-going basis. Other Hospitals select prospect households for their ERs and community programs by demographics. Hospitals who are marketing Orthopedic & Joint Replacement services are selecting arthritis sufferers and active sports participants. Hospitals who are marketing Baby Fairs select mailing lists of millennial households. The key to success is the complete package, which matches the creative to the mailing list to the offer.

Thank you to Pamela Oldham and DM News for some great research and information! 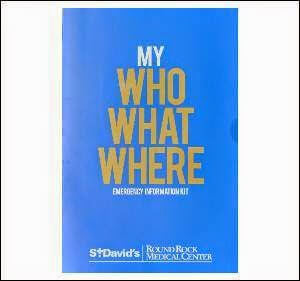